In providing and insight into the Latvian legal system, Ineta Ziemele underscored that historically it had been influenced by the German legal system and that the synergy of both legal systems continued to exist.

This year, at the end of April, the Constitutional Court for the first time participated in the Heidelberg round-table discussion (Heidelberg Gesprächkreis) in Germany, organised by Max-Planck-Institut, held annually and involving judges from constitutional courts belonging to the German legal tradition and of the European courts.

During the conversation, Ineta Ziemele informed the Ambassador that in the coming year, on 21-22 March, the Constitutional Court, in co-operation with the Court of Justice of the European Union, was organising an international conference: “The European Union, United in Diversity: Between Shared Constitutional Traditions and National Identities” and also underscored that also in the coming year the Justices of the Constitutional Court were planning a meeting with representatives from all foreign embassies in Latvia.

At the end of the meeting, the parties also discussed the experience of both countries related to ensuring democratic freedoms and the way the theme of the rule of law was represented in mass media. 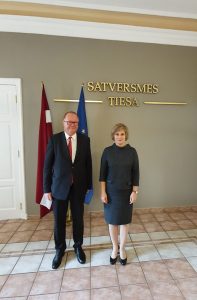