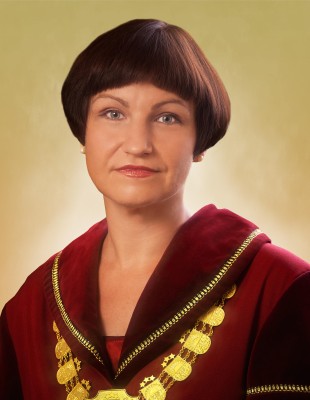 In 1991, Sanita Osipova graduated from the Faculty of Law of the University of Latvia, and in 1998 she obtained a doctor’s degree at the same University by presenting her thesis “The Rights of the Luebeck City and Influence thereof on the Cities of Hanseatic League”.

Sanita Osipova carries out extensive scientific research. She presents reports on results of her research at international scientific conferences and writes textbooks and academic papers. As a visiting academic and a visiting professor, she worked at the Wilhelm Westphal University in Muenster.

Sanita Osipova is the author of more than 100 publications on issues of sociology of law (such as the efficiency of law and legal culture), history of law, constitutional law and lawyer’s ethics. Likewise, she has led different projects of law studies, as well as scientific, academic and professional committees, and acted as an invited expert.

Sanita Osipova is a founder and an assembly member of Kārlis Dišlers Foundation. The Foundation aims to promote the development of national state law studies, to engage students of state law and facilitate the strengthening of the values of a democratic rule-of-law state in society.

In 2017, she became a member of the European Society for Comparative Legal History (ESCLH).

Following confirmation by the Saeima in June 2011, she assumed the office of a Justice of the Constitutional Court on 17 August of that year.

On 14 October 2020 Sanita Osipova was elected President of the Constitutional Court.

The Certificate of Merit of the Rector of the University of Latvia awarded on 26 September 2008.

The Ministry of Justice of the Republic of Latvia Justice System 3rd Degree Badge of Honour awarded on 18 March 2010.

The Letter of Commendation of the Minister for Justice of the Republic of Latvia for the contribution to the establishment of the judicial system and judicial policy awarded on 4 January 2014.

The State Police “Jubilee Badge of Honour “The 100th Anniversary of the Latvian State Police”” awarded on 13 November Certificate No 800.