United European legal space – the Constitutional Court, the Supreme Court and the Court of Justice of the European Union meet in a dialogue

“The national courts also participate in the development of a common European legal space. They are equally responsible for ensuring effective protection of rights that are derived from the EU law. Interpretation of the EU treaties and secondary legal acts falls within the competence of CJEU and is binding upon the Member States, therefore the perspective provided by CJEU within the framework of the webinar’s theme is very important.”

In his opening speech Koen Lenaerts, President of the CJEU, welcomed the Constitutional Court’s initiative to strengthen bilateral relations with the CJEU. He stressed that national constitutional courts and other judicial institutions have an important role to play in ensuring the uniform interpretation and application of EU law. To achieve this aim, the CJEU provides to the courts of the Member States explanations on the precise interpretation of EU law through the preliminary ruling procedure.

“Last year, out of the 735 incoming cases that were brought before the Court of Justice, 556 were preliminary rulings (75 %), of which 17 were referred to the Court of Justice by Latvian courts – 4 of them by the Satversmes tiesa. This procedure has become the cornerstone of the European legal order since it allows for a direct dialogue with Member State courts. In order for this cooperation mechanism to function properly, the culture of respectful dialogue between courts needs to be maintained and strengthened.”

In his presentation, Vice-president of the Constitutional Court Aldis Laviņš highlighted two approaches for substantiating the Constitutional Court’s competence to review the compliance of national legal provisions with the EU law. The first one is based on the  thesis that  acts of secondary EU  law are part of the international treaty by which Latvia acceded  to the EU, therefore the Court may review, whether a national provisions complies with the international agreements, entered into by Latvia, which are not contrary to the Satversme. The second one – EU legal acts may be examined as any legal provision of higher legal force. At the same time, he noted that also if the Constitutional Court would dismiss its competence to review compliance of a national legal provision with the EU law (regulations and directives), the Court would take into account the European Union law both in elucidating the content of national legal provisions and revealing the scope of the norms of the Satversme.

Chief Justice of the Supreme Court Aigars Strupišs, in turn, emphasised the judicial dialogue as an instrument, in the framework of which the national court could refer questions for preliminary rulings as well as discuss aspects in the interpretation or application of the EU law. Aigars Strupišs underscored, inter alia, the importance of legal education both in the study process and in the continuous training of judges to ensure judges’ awareness of the hierarchy of sources of law and the choice of the most appropriate method for applying law.

“We all together are European judges and we are responsible together for the rule of law in the shared European legal space. We all have our own competence and obligations following from it, which must be fulfilled with utmost responsibility,” Chief Justice of the Supreme Court emphasised.

Judge of CJEU Ineta Ziemele stated in her presentation:

“The Constitutional Court may set aside a national legal provision if it identifies an incompatibility with an EU legal act. Pursuant to Article 68 of the Satversme and abiding by the principles that characterize the European legal acts, the European law is part of the Latvian legal system. The main method for guaranteeing the functioning of both legal systems is harmonious interpretation of the national and the European law. However, constitutional courts must always review the compatibility of legal norms with the constitutional identity of the state. The core of Latvian constitutional identity, among others, is the continuity of the state and the Latvian language.”

She drew attention to the risk, still present in the European legal space, related to the existence of various levels of human rights protections since the so-called “architecture” of European human rights is fragmented, formed by three main structures – CJEU, the European Court of Human Rights and the national constitutional courts. Secondly, CJEU should continue actively developing a formal dialogue with constitutional courts, which is important for the general development of the EU.

President of CJEU Koen Lenaerts pointed out that the EU judicial system was founded on the Member States’ courts, since they, first and foremost, interpret and apply the EU law and, in some cases, request preliminary rulings from CJEU.

“Member States and the EU citizens are equal before the EU law, therefore all EU legal acts are to have the same meaning and to be applied in the same fashion throughout the whole territory of the EU, regardless of conflicting provisions of national law.”

In conclusion, Sanita Osipova emphasised that the judicial dialogue, which had been started, should continue. Courts must speak among themselves to facilitate mutual understanding.

“The EU is a union of equal states and we are part of it. The Constitutional Courts of the Member States represent the will of their people, and all of this contributes to the core of the common legal European Space. CJEU implements the delegated will of our people at the supranational level in order to develop an effective functioning of the common legal space of the EU. We are all judges of the European Union.”

President of CJEU Koen Lenaerts underscored that the sharing of opinions and information had been important. To do its job properly, CJEU must understand the general system of legal protection of each Member State.

“Now I have gained better understanding of the judicial system in Latvia, the role of the Constitutional Court and the Supreme Court. I would like to emphasize that CJEU is our common court. The judicial dialogue definitely must be continued, probably, by involving also the constitutional and supreme courts of other Member States.”

The other Justices of the Constitutional Court and Senator of the Supreme Court Jautrīte Briede also participated in the webinar. 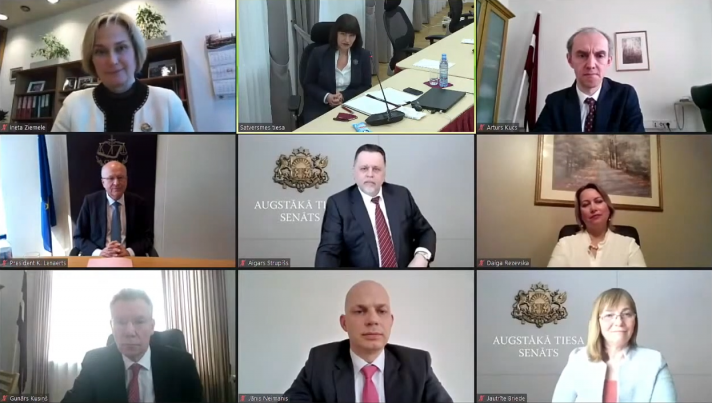 Photo: Screenshot of the webinar.

Recording of the webinar is available on the Constitutional Court’s YouTube channel: